Yes, the baby cranes are growing fast, and the whooping crane nesting season of 2014 is fading into history – to be studied and analyzed at length for future predictions and recommendations. The tiny whooping cranes that have resulted from this year’s eggs are quickly turning into substantial cinnamon-feathered crane kids, standing tall on the longest, skinniest legs you’ve ever seen. A baby whooping, within days of hatching, looks this – on the right:

[ That’s a whooping crane puppet, with a days-old chick. The puppet is used to help train chicks in both the ultralight and direct autumn release programs. The chicks are costume-reared after hatching from the eggs of cranes in the captive populations.] 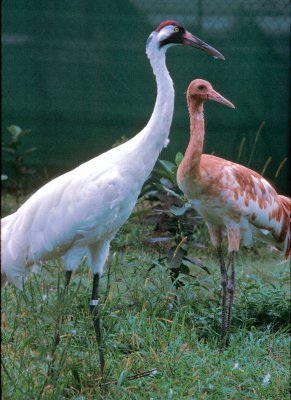 Now, within weeks of hatching, it looks more like this (below), yet, the young crane colt in the picture is considerably more mature than the 2014 ultralight chicks at this time. To see exactly what they look like right now follow this link to the Operation Migration Field Journal, and you’ll find five photos taken by OM volunteer Doug Pellerin, of Wisconsin’s newest, youngest whooping cranes.

These chicks have been allotted to the ultralight-led migration training program. They hatched in May at Patuxent Wildlife Research Center in Maryland and have been in training there – getting used to the sight and sound of the ultralight “trike” – until this past week.

On Tuesday (July 8), as happens every year to the chicks that begin life and ultralight training at Patuxent, they were placed in individual crates, and driven silently to the airport in Baltimore, Md., then flown to Wisconsin on a private jet courtesy of Windway Capital of Sheboygan. 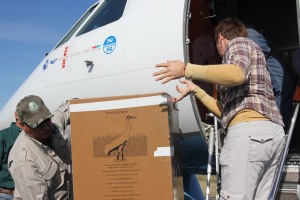 Although this picture shows the arrival of a whooping crane chick in Louisiana for the Crane Restoration project that began there in 2011, it is a copy of the scene that unfolded seven times in Wisconsin last Tuesday afternoon. (Photo courtesy of Louisiana Department of Wildlife and Fisheries)

Their flight left Baltimore at 9:30 a.m. and by mid-afternoon, the new Wisconsin chicks were being released at the White River Marsh State Wildlife Area, where two large pens – one dry, one wet, will be their home, and a grassy runway will be their daily exercise and training site for the weeks from now until migration.

That’s the basic report on the life, to date, of the ultralight chicks of 2014. Of course it follows, with only small variations, the early days of all the whooping cranes that started life as ultralight trainees in the Eastern Migratory Population since 2001.

But that’s only part of the story of the whooping crane hatchlings of 2014. Eight more chicks are being raised, in other ways, to join the EMP whooping cranes. Here’s a brief rundown of who and where they are right now.

Four chicks are being costumed-raised at International Crane Foundation for the Direct Autumn Release program. They will eventually be taken to Horicon NWR and released near adult Sandhill cranes, in hopes that they will follow the adults on migration.

Four more chicks are to be released into the new (as of 2013) experimental “foster family” program. This program is officially known as the “parent-reared release program,” meaning that they are currently being raised at Patuxent by the captive cranes which hatched them. Later this summer they will be brought to Wisconsin and released near adult whooping crane pairs that have no chick, hopefully to be adopted by them and taught the migration route in that foster family.

Last, but really most important, are the chicks that hatched in the wild this year in Wisconsin.  While a record number of 11 chicks were hatched here, as of June 24th, only 2 are confirmed alive (although I believe there is still the possibility that a third chicks survives).  The survivors that have been confirmed are wild chick #1 of 2014, and #3-14.  On July 8th, ICF posted this beautiful photo of #3-14 with its two wild parents.  Don’t miss this one!