Following the previous post reporting on the 100th anniversary of the extinction of the passenger pigeon, I want to write just a few words about the Wilderness Act, and point you to some interesting resources about the law. The Wilderness Act was signed into law by President Lyndon Johnson fifty years ago on September 3, 1964. Friends and advocates are celebrating its golden anniversary.

True wilderness areas are the places left to us “where man himself is a visitor who does not remain” (those words are from the law’s own definition of wilderness). They are the places where the popular phrase “take only pictures, leave only footprints” really is the law of the land. They are places accessible to you only by foot or on horseback; (or, in the case of the Gaylord Nelson Wilderness in the Apostle Islands, by boat). Tent camping – in a tent you backpack in – is the only possible way to overnight in a wilderness area.

Wisconsin has seven such designated wilderness areas. One of them, the Wisconsin Islands Wilderness, composed of three small islands in Lake Michigan near the tip of Door County, is not open to the public.

The other six (all are open) are spread across northern Wisconsin. Four of them are within the borders of the Chequamegon National Forest – 2 in Bayfield County, one in Forest County and another in Florence County. The newest and largest wilderness area in Wisconsin is the Gaylord Nelson Wilderness. It lies within the Apostle Islands National Lakeshore, designated by law and signed by President George W. Bush in 2004. 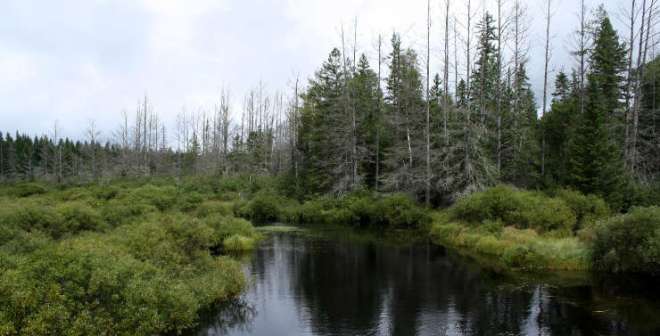 Here is a link to a page all about the Wilderness Act, offered by The Wilderness Society, which includes a good capsule history of the efforts that went into crafting the law. Most helpfully, there are short features about eight people who were key to making it happen, including Aldo Leopold and the writer, Wallace Stegner.

At Wisconsin Trails, Chelsey Lewis, offered a personal reflection of the importance of living a life rich in outdoor experiences. She also shares more about the Gaylord Nelson Wilderness and includes links to, and a description of, each of Wisconsin’s wilderness areas. If you’re thinking of visiting any of them yourself, this will provide the details you’ll need to start your trip.

And finally, Spencer Black, (who was in the Wisconsin State Assembly from 1985 to 2011, and chair of the assembly’s natural resources committee, 1987-1994, and 2009-10), writing earlier this year at The Capital Times, reviewed more of the history behind, and reasons for, the Wilderness Act

Black is currently the national vice-president of The Sierra Club, and an adjunct professor of urban and regional planning at UW-Madison. It was challenging, he writes, to get Congress “to accept the farsighted notion that we should preserve at least a modest portion of our original landscape so that future generations might be able to see the great beauty and biological diversity of our native land.” For many of us, he concludes, the need to protect wilderness “is instinctual.”