Seven young whooping cranes, hatched in captivity in the spring of 2014, and costume-reared all summer at wildlife refuges, first in Maryland and then in Wisconsin, are now safe in Florida and well on their way to becoming wild and free. They’ve been there, at St. Marks National Wildlife Refuge, on the gulf coast just south of Tallahassee, a week now. This is The Badger & the Whooping Crane’s update on their ultralight-led migration and the outlook for the rest of their first year of life.

A Most Unusual Migration?

This had to be one of the strangest migrations led by Operation Migration, yet. It is migration #14 for the ultralight pilots and their partners in the Whooping Crane Eastern Partnership. Each migration is unique with its own sets of challenges and memorable moments – weather calamities, injuries, a once-disputed FAA license, extremely cooperative birds, as well as unusually non-cooperating birds – all those are things I’ve noticed, and I’ve just been following this story closely since 2010.

This migration seems to have had a little of most of those things – minus any FAA disputes. As is so often the case, it’s that great imponderable – The Weather – that causes most of the problems that Operation Migration has to contend with; that’s probably never been truer than this year. Very specific weather conditions, including wind speed and direction, are required for the little ultralight aircraft to fly with large young birds that are closely following it. Generally good weather for these flights would be the sort of conditions you expect and routinely get – at least for a few special days – in the autumn of a place like Wisconsin.

Winter in Wisconsin: It’s No Place for Whooping Cranes

But not this year. I live here and can fully attest to the frustrating fall days 2014 produced; it’s not that we were having blizzards, or anything like that – just a lot of cloudy, windy, drizzly days, one after another; relentlessly. And eventually, fairly early in November, that began to feel like winter – and with it the very real possibility of blizzards.

At that point Operation Migration and its seven whooping crane colts, were still grounded in the middle of Wisconsin with only 50 miles of the 1100 mile journey behind them; one crane was still nursing a late-summer injury, and 3 others were seemingly recalcitrant about flying. So on the evening of November 14th (with predicted lows for the next week showing single digits) all seven cranes were packed into boxes and driven in a van to northern Tennessee. The story of that unusual road trip is told at the Field Journal, by conservation leader and OM board member Walter Sturgeon, who drove that van.

At first the weather in Tennessee seemed to mimic the nasty autumn of Wisconsin, but at last, during the week of our Thanksgiving holiday here in the U.S., both the weather conditions, and OM’s luck with the cranes began to change for the better. Before the week was over 5 of the 7 cranes had flown 3 long, perfect flights (65 miles, then 67 miles, and 111 miles)! It seemed an astounding performance from cranes who had last flown a month before, and then only for a mere 28 miles.

That very good news was followed on December 2nd and 3rd with another welcome announcement that all 7 of the cranes were now flying. They hopscotched down the length of Alabama and on Dec. 9th crossed over into the southwestern tip of Georgia. Less than 100 miles were left to their destination! Two short flights later the ultralights led the seven cranes down to their large winter pen site at St. Marks NWR in Florida. As the flying contingent got close enough, two costumed crane handlers “called them down” into the pen, and the ultralight pilots quickly climbed back into the sky alone. 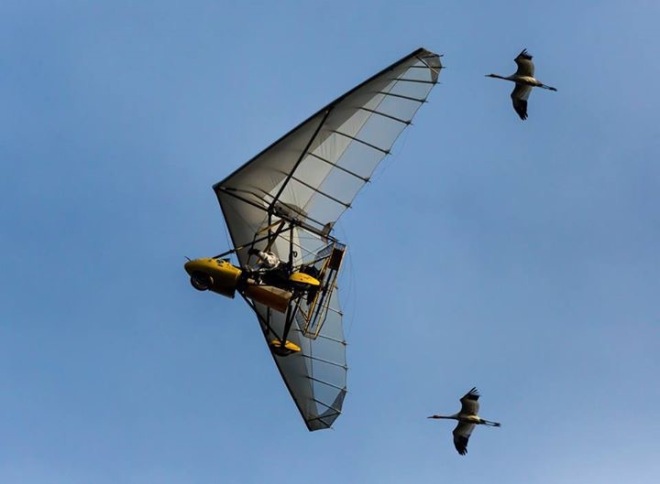 Photographer Karen Willes, watching the Florida arrival of the Class of 2014 from the town of St. Marks, caught this beautiful moment: ultralight pilot Brooke Pennypacker had two of the seven cranes “locked” to each wingtip. (Photo used with permission)

And with that, the 2014 migration had ended. It’s final 16 days seemed as smooth and flawless as its first six weeks had been rough and fruitless. To recap this migration with a few numbers: it has ended earlier, December 11th, than most other migrations (you can check out the timelines for 2013 and ’14 here, and back to 2008 here). It probably has the highest percentage of “grounded” days: 51 out of 63. And it absolutely logged the highest number of miles that the cranes were crated and driven, since more than 500 miles were covered, by van, in one day, November 14th, between central Wisconsin and northern Tennessee.

But Will They Come Back to Wisconsin?

So what happens next, after a winter of semi-wildness in a protected habitat at St. Mark’s? Will our seven youngest cranes find their way back to Wisconsin when they take off on their first unaided migration north come spring? OM Pilot Joe Duff wrote about this at the Field Journal when the “Plan C” to drive to Tennessee was unveiled: ” . . .they will have the knowledge of the direction from which they arrived,” he wrote, and from Tennessee “. . it’s a straight run north, and with luck, we will see them back in White River next spring.”

Watching how the great majority of preceding ultralight-trained whooping cranes have aced this, it seems clear that there is a powerful attraction pulling the young birds back to the area where they first lived and fledged. I’m betting (and hoping!) that the first return trip to Wisconsin for these youngest whoopers will be as smooth as the last three weeks of their unusual ultralight-guided journey. But only time will tell, and this will be one of the most interesting stories to watch for in the new year!

And Links to Other Whooping Crane News:  A Lawsuit in TX, A New Cohort in LA,  and More!

Following are links to several other items of whooping crane news, including a blog post from Friends of the Wild Whoopers about a federal case involving whooping cranes, water rights, and the Endangered Species Act. The case has been making its way through the federal court system, first at the District Court level in Texas, and now at the Fifth Circuit Court of Appeals.

The District Court found for the plaintiffs, The Aransas Project, that argued that 23 endangered, federally protected whooping cranes had died in Texas in 2009 because of state action that authorized certain water withdrawals which in effect wiped out the cranes’ food supply. Attorneys for The Aransas Project are hopeful that their case, won at the District Level, but lost at the Appeals level, will now be heard by the Supreme Court.

In Louisiana:  The newest cohort of juvenile whooping cranes to join the non-migratory flock of whoopers being established in Lousiana was delivered to the White Lake Wetlands Conservation Area, in Vermillion Parish, west of New Orleans on Dec. 4th. There were 14 young whooping cranes in this cohort, bringing the total Louisiana flock population to 40. Read the Louisiana Department of Wildlife and Fisheries for more about this new program.

From the International Crane Foundation:  A team of experts from ICF has published findings in the November issue of the Journal of Wildlife Management; Nathan D. Van Schmidt, Jeb A. Barzen, Mike J. Engels, and Anne E. Lacy have published “Refining reintroduction of whooping cranes with habitat use and suitability analysis,” which explains the process used in 2011 for selection of the White River Marsh Wildlife Area and Horicon Marsh as new release sites for wild whooping cranes.

Kentucky’s Sandhill Crane Hunt is ongoing right now, extending from December 13 through January 11, 2015. Here is an article in the Glasgow (Ky) Daily Times cautioning that there have been current sightings of endangered whooping cranes in Kentucky, and urging hunters to familiarize themselves with the differences between the two species. “If you shoot one,” said state wildlife biologist John Brunjes, “then you’re going to be in trouble.”

7 thoughts on “Yes, Success! [For Operation Migration’s Class of 2014] & Other Whooping Crane News”